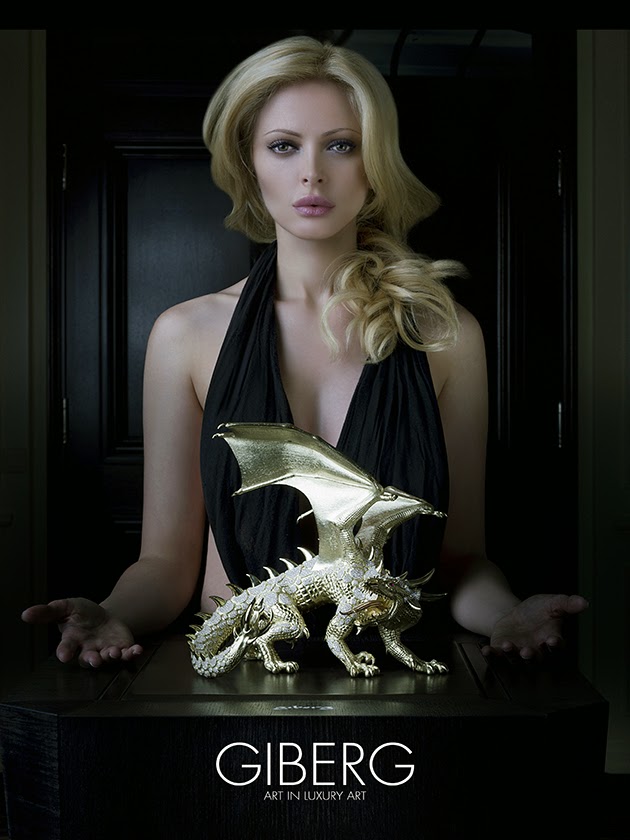 This Masterpieces is the most expensive Dragon in the world.  The Swiss artist and goldsmith Andreas Altmann creates the stunning dragon sculpture Ahton. This is my Shooting with the Dragon!!!!!!

The work of art is five kilograms of pure G

old, 7.739 Diamonds, 2 Rubies were used for the Dragon’s eyes. The price for this 24 centimetres high piece of art is ten millions of euros.

Andreas Altmann created the Dragon and the book and the accompanying shrine together with the team of his exquisite Noble Forge Gisberg between 2007 and 2012.

The dragon Ahton is part of a Scandinavian saga, which is preserved in the artist’s family for generations. The mystical creature acts within the saga as a counselor for people and encourages them not to forget of their goals.

From the Giberg web site: www.giberg.com :” A UNIVERSAL CULTURAL LEGACY
Of the many known cultures that constitute our universal legacy, there is hardly one without a dragon of one kind or another. The mythical creature has figured prominently throughout the long cultural history of Eastern Asia, and it was the subject of representations in the Middle East as far back as the fourth millennium B.C.

Dragon-like creatures were also not unknown in prehistorical, classical and medieval Europe. They moreover pervaded the mythology of pre-Columbian America, generally in the shape of a plumed serpent.

Through their ability to crawl, swim, fly and belch flames, dragons are associated with the ancient concept of the four elements. Some appear to have two legs, others have four – or, snake-like, none at all. Many have multiple heads, like the Greek Hydra, which had nine. And through its open jaws or nostrils many a dragon spews flames or exhales fire.

In Eastern Asia, dragons are auspicious beings, bringing good fortune or representing fertility. Other cultures figure their involvement in creation myths. Often associated with water, dragons are encountered as guardians of springs, whose life-giving qualities they protect. Some of them, like the biblical Leviathan or the Greek Ketos, actually inhabit deep waters. For the peoples of Northern Europe, dragons used to represent the unpredictable and threatening principle of Chaos; they were also, however, thought of as vigilant and wise guardians of treasure.

This multifaceted, mysterious, protean creature will continue to inhabit our collective imagination, as powerful now as it was then, at the dawn of human history. The dragon has left us a slumbering cultural legacy, which is ours to revive, appreciate and enjoy evermore. It is a legacy that is brought back to life by Ahton, keeper of confidence.


Ahton The Dragon Ark
A dragon’s ark was especially designed as a sophisticated showcase for the Giberg sculpture. It is made of ancient moor oak, with select ebony insets. Deep within lies high precision Swiss clockwork, consisting of over one thousand parts. Its mechanism ensures that, if so wished, the dragon remains dwelling in his hiding place, or else comes into view, to the astonishment of the assembled guests. It is wound up by hand and there is a power reserve display. A secret compartment in the ark moreover houses the book containing Ahton’s legend. A hand-made leather bag and a special flight-case are available, should the sculpture need to be transported.