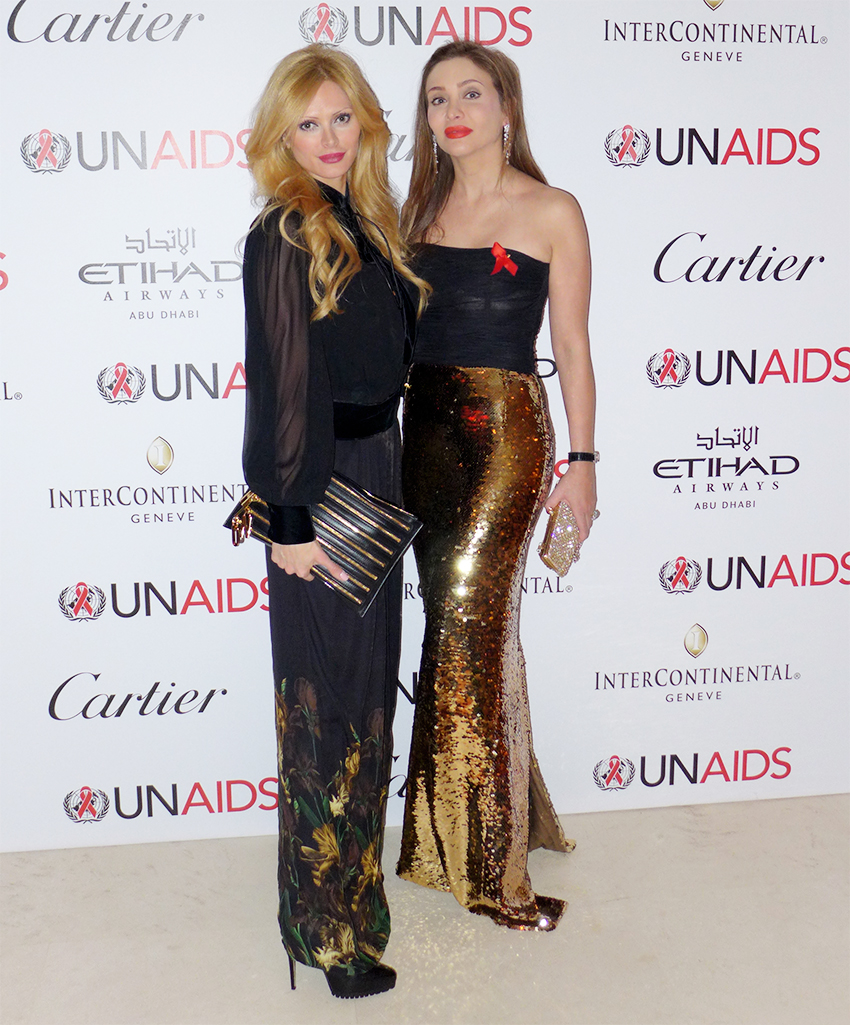 From the Unaids web site:

GENEVA, 19 March 2015—UNAIDS, in partnership with the hotel InterContinental Genève, Cartier and Etihad Airways, is holding its first fundraising gala, in Geneva, Switzerland. The event is part of UNAIDS’ efforts to ensure that children everywhere are free from HIV and that mothers have access to antiretroviral medicines to ensure that they stay alive and well.
The gala is being held under the patronage of Caroline Rupert, Kweku Mandela and Ndaba Mandela, and is being attended by personalities from both Switzerland and abroad.
Florence Ngobeni-Allen, Global Ambassador for the Elizabeth Glaser Pediatric AIDS Foundation, from South Africa, and Ashley Rose Murphy, from Canada, spoke about their experiences of living with HIV. “I was born in 1998, when Canada had the medications and the ability to ensure that almost zero babies were born with HIV. I should not have HIV. But I do,” said Ms Murphy. “Now these life-saving medications can be available everywhere. If we work hard, we can make sure that no one, no matter where they live, is born with HIV.”
The musical highlight of the evening will be the Norwegian duo Nico & Vinz performing their hit songs Am I Wrong and My Melody, a song dedicated to people living with HIV.
A live auction will be curated by David Bennett from Sotheby’s, for which Maison Cartier has provided a set of high jewellry earrings and a lady’s watch. Further items include pieces from Victoria Beckham’s collection, Christian Louboutin custom-made shoes, a watch from Piaget and a Nelson Mandela limited edition print donated by Annie Leibovitz.
The theme of the gala is “Cities around the world”. Cities’ responses to HIV have been at the forefront since the start of the epidemic. Fast-Tracking the response to HIV in cities will be essential to ending the AIDS epidemic by 2030.
The partnership between UNAIDS and the hotel InterContinental Genève began in December 2013 with the launch of the Where History is Made campaign, a joint initiative to raise funds to support theGlobal Plan towards the elimination of new HIV infections among children by 2015 and keeping their mothers alive (Global Plan).
In 2013, some 240 000 children became newly infected with HIV and 190 000 children died of AIDS-related illnesses. Without HIV treatment, half of all children born with HIV die by the age of two and most die before their fifth birthday.
The Global Plan aims to reduce the number of new HIV infections among children by 90% and AIDS-related deaths among pregnant women and children by 50%. It focuses on all countries, but particularly on the 22 countries where 90% of new HIV infections among children occur.
UNAIDS
The Joint United Nations Programme on HIV/AIDS (UNAIDS) leads and inspires the world to achieve its shared vision of zero new HIV infections, zero discrimination and zero AIDS-related deaths. UNAIDS unites the efforts of 11 UN organizations—UNHCR, UNICEF, WFP, UNDP, UNFPA, UNODC, UN Women, ILO, UNESCO, WHO and the World Bank—and works closely with global and national partners to maximize results for the AIDS response. Learn more at unaids.org and connect with us on Facebook and Twitter.
2015, CHARITY NIGHT
Share on: